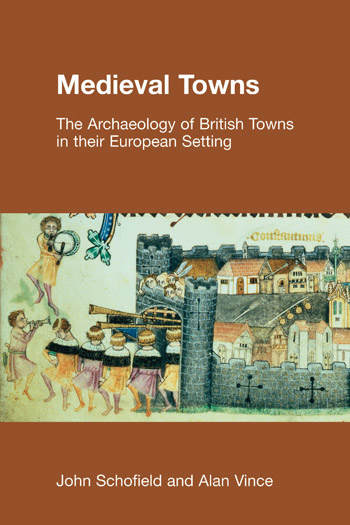 Archaeologists have shown that towns can claim to be more representative of the nature of society of which they formed part than any other type of site. In towns we are most likely to find archaeological evidence of both long-distance and local trade, of exploitation of natural resources, of specialization and of technological evidence in manufacturing, of social differentiation, of the means of political control, and of the religious aspirations of the population.


Medieval Towns is the second and enlarged edition of the book Medieval Towns which was published in 1994 by Continuum. It surveys recent work on the archaeological study of medieval towns in Britain. Its emphasis is on the discoveries by archaeological teams, nearly always on sites to be developed or already under construction. From the vast haul of information now at our disposal, after thirty years of data gathering, we can begin to ask questions of many kinds. What went on in medieval towns? How did the rich and poor live, what nourished them, what did they die of? What was the weather like, the quality of life, the restrictions or special pleasures of living in towns?

'It is entirely appropriate to recommend this book in the highest terms to anyone with a serious interest in the middle ages, regardless of their own disciplinary background. Readers will discover not only
much about individual places and medieval urban society in general, they will also learn much about how archaeologists work, think and approach issues of social and economic reconstruction.'