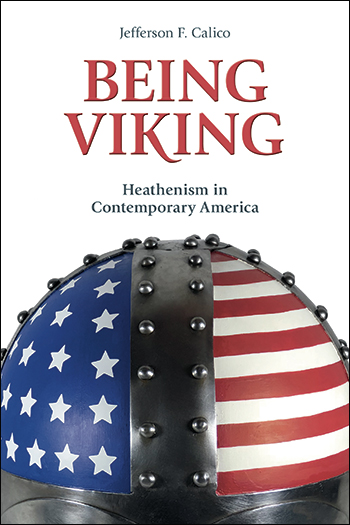 Contemporary Paganism has been a growing segment of American religiosity for over forty years and is composed of a variety of groups, practices, and ideologies. Ásatrú (Asatru), a movement that seeks to revive the practice of pre-Christian Norse religion, remains one of the least studied of these Pagan movements despite its growing prominence in the Pagan community.

Being Viking provides a rigorous ethnographic account of the Asatru religion in America, also known as Heathenry or Heathenism. Arising from five years of original ethnographic fieldwork among American Asatru adherents, the book expands our understanding of this religious movement by providing a comprehensive analysis as part of the American religious context. Asatru is a reconstructionist form of contemporary Paganism, deriving its sacred stories, polytheism, and religious culture from an interaction with the ancient Paganisms of pre-Christian northwestern Europe. Yet, contemporary tributaries shape the movement’s reception of the past and its enactment of the ideas and practices discovered there. American Asatru encompasses a diversity of approaches and offers a distinctive counterpoint to some of the characteristic patterns of religious life found in other forms of contemporary Paganism. Being Viking examines the complex interaction of new and old that influences Asatru symbolism, spirituality, and social organization.

In addition to describing its rich religious ideology, Being Viking sets the movement within the context of contemporary American culture. Scholars have recognized that new religions offer alternative solutions to the felt tensions of society. Using this paradigm, Asatru is seen as a movement that provides creative religious solutions to the tensions experienced by modern Americans. This study addresses several of those points, including the socially isolating effects of modernity, women’s roles, epistemology, and human relationships with nature. Asatru draws on ancient Norse ideas and practices to create new modes of living in the modern world that seek to create meaning and deepen the lived experience of its contemporary adherents. Asatru is in the process of emerging as a viable and complex religion that achieves a degree of cultural continuity by reinvigorating certain American values. In this light, Asatru is a new American religion that incorporates and adapts important cultural values while at the same time challenging some scholarly assumptions about new religions.

It is delightful to read a book on a new religious movement (with ancient roots) that is so well written, well informed both with regard to present and historical contexts, benevolent and (apparently) comprehensive.
Ronald Hutton, Professor of History, University of Bristol

Being Viking is a well-researched, up-to-date and in-depth anthropological study of a small but complex and growing new religious movement in North America. The author engages thoroughly with his first-hand material and keeps an admirable balance between respect and academic critique. This book is a highly original addition to existing studies, and it provides thought-provoking material for discussion and future research.
Stefanie von Schnurbein, author of Norse Revival: Transformations of Germanic Neopaganism

Calico adds to the growing bookshelf of academic work on Ásatrú with a solid review of the existing literature and an engaging narrative of his own experiences as a participant-observer in the new religious movement. Building on the work of Kaplan and Gardell, he paints a detailed picture of several subcultures within the larger set of American Heathen communities.
Dr. Karl E. H. Seigfried, author of The Norse Mythology Blog and goði of Thor's Oak Kindred

An important and very welcome contribution to the study of modern Heathen religion and for its breadth is probably set to become a required volume on the subject. It is essential reading for all scholars of modern Paganism and highly recommended for scholars of U.S. religion and new religions more broadly.
Nova Religio

Being Viking: Heathenism in Contemporary America has a richness of fieldwork and interview material that makes it a significant new contribution to the emergent academic field of Heathen Studies. It is engagingly written and brimming with enthusiasm and deserving of a wide readership. It will be of interest to scholars of fieldwork in the humanities and social sciences, to specialists in new religious movements (NRMs) and Pagan Studies, and to students in Religious Studies generally. I recommend it unreservedly.
Alternative Spirituality and Religion Review

In delving into a new religion, Calico has produced an insightful, well-written and highly researched study of American Asatru. Those in the field of religious studies will find Being Viking a helpful look into the practices, history and beliefs of this new religious movement. I recommend this book to those interested in the changing landscape of American religion.
The Christian Librarian

A welcome contribution to this yet still underresearched part of contemporary Paganism. It gathers new valuable material based on five-year-long fieldwork drawing on participatory observation and interviews of some fifty adherents, most of whom are Heathen opinion-makers and religious leaders. [Provides] a solid introduction to the subject.
Religious Studies Review

Being Viking stands tall as a truly monumental achievement. It is the most comprehensive monograph yet published on Heathenism/Asatru/Modern Norse Paganism in America and will be required reading for anyone interested in this topic for years to come.
Reading Religion