Resistance to Empire and Militarization 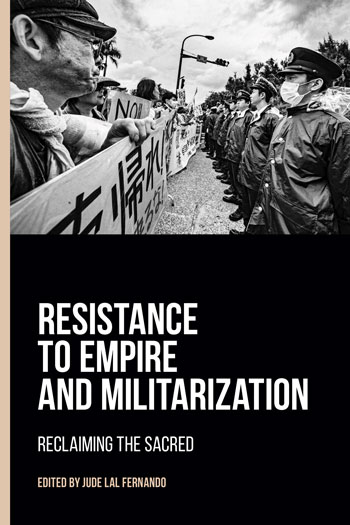 Resistance to Empire and Militarization gathers critically reflective articles by 25 leading and emerging scholars/practitioners from religious and non-religious backgrounds, representing three generations of survivors of imperial invasions and genocidal massacres across the globe. The authors interrogate and expose the oppressive religious and secular ideologies and mechanisms of the modern empire and its allies that cause desecration of lives and the earth through various means, ranging from psychological operations to the brute force of advanced technological warfare.
Offering perspectives from the Middle East, East Asia, South Asia, Africa, Latin America, and the Pacific and the Caribbean Islands, the authors address topics such as mass killings, starvation, rape, militarized prostitution, torture, forced disappearances, land grab, displacement and the destruction of nature, while articulating people’s inherent collective aspiration for liberation that is expressed in multiple languages of faith as well as in secular humanist strands. They help evoke and sharpen the alternate consciousness among peoples in furthering resistance, and in envisioning and building a non-imperialist future for us, for our children, and for our planet.
These are testimonies of truth and liberation, written with a prophetic urgency.

This book is a collection of deep reflections on the struggles of all those “modern prophets” who are fighting against the Empire in their own contexts through multiple ways. They are academics, activists, artists, theologians, and common people from the margins of the society.
We pray that these testimonies of resistance will inspire all of us and strengthen our common struggle against the Empire. We urge that through this work our global network of anti-war and anti-militarization will be strengthened.
Sudipta Singh, Mission Secretary, Research and Capacity Development, Council for World Mission, Singapore

This book contains extraordinary material. It is a brilliant mix of interpretation and realisation by outstanding thinkers, activists and intellectuals from many walks of life and origins as to what a world at peace requires. The language and its scope is fascinating and gives one hope that with such clear minded people spread across our globe progress towards peace for all humanity and success thereof is indeed possible.
Dr. Denis Halliday, former Assistant Secretary General of the United Nations who resigned from his 34 year old career in the UN in protest of the economic sanctions imposed on Iraq by the Security Council

This book, which is based on the authors’ concrete actions and commitment for liberation, clearly shows that the fundamental causes of ethnic and regional conflict, poverty, socio-economic and gender inequalities, discrimination, exploitation, and environmental destruction, in the non-Western, Three-Fourths World, are imperialism and militarism. At the same time, the authors invite us on a journey of overcoming imperialism and militarism to save humankind and nature, and to a life of peace, restoring our divinity and humanity.
Prof. Kim, Sung-Jae, President of Kim Dae-Jung Nobel Peace Prize Memorial, Distinguished Professor, Hanshin University, Former South Korean Minister of Culture and Tourism

An exceptional book in three senses: one, in the conception of empire and militarization as an encompassing reality that goes beyond the use of force to show its political, ideological and cultural dimensions. Two, a reflection that covers phenomena and studying the experiences of resistance to empire in the countries of five continents. Three, in the variety of authors that includes prestigious academics as well as resistance activists, who have in common a vision committed to fighting the devastation of human life and the earth that has been perpetrated by imperialism and its basis and reason for being: capitalism.
Magdalena Galindo, Professor in the Faculty of Economics, Universidad Nacional Autónoma de México

Reclaiming the Sacred is a rare product. Three factors give it its edge. One, its contributors. Twenty-five leading scholars/practitioners (covering three generations of imperial invasions and genocidal massacres across the globe) set themselves the question of how to build a non-imperialist future and to give hope to people seeking justice, peace and freedom. Two, their focus is Causes. Why war, poverty or inequality? Questions rarely asked. Solutions often sidestepped or suppressed. Three, their resources. Neither ideology nor Reports (Governments, charities, world organisations or whatever) but listening to people, seen not as ‘victims‘ but ‘Bearers of Hope’ in search of an alternative world worth fighting for.
Clearly a call for prayer, and plenty to pray about, but only if we set about creating conditions in which the prayers can be answered.
Baptist Times