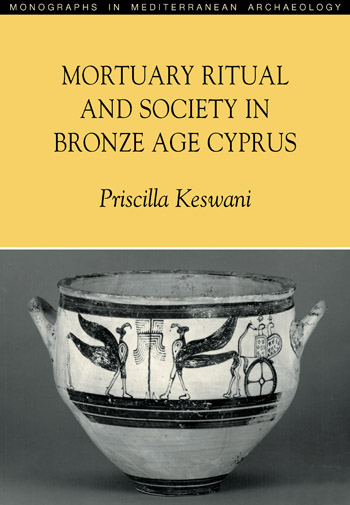 Mortuary Ritual and Society in Bronze Age Cyprus is a ground-breaking investigation of burial practices and social transformations in the era when Cypriot agricultural communities moved from village to urban life and became major players in the eastern Mediterranean copper trade.


Confronting the many interpretive challenges posed by tombs used for multiple interments, the author develops an innovative theoretical and methodological approach that enables her to define and elucidate the shifting spatial relationships between tombs and habitation areas, the elaboration of rituals involving secondary treatment and collective burial, and changing patterns of mortuary expenditure and symbolism throughout the Bronze Age.


Keswani proposes that during the Early-Middle Bronze periods, the growing elaboration of mortuary festivities and their crucial importance in negotiating status hierarchies contributed to the intensification of Cypriot copper production and the expansion of interregional exchange relations. This helped set the stage for the rise of urban polities early in the Late Bronze Age, when the presence of hereditary elites first becomes apparent in the Cypriot archaeological record. Subsequent changes in mortuary practice suggest that the importance of collective burial rites and traditional modes of ritual display diminished over the course of the Late Bronze Age, as urban institutions multiplied and the bases of social prestige were transformed.

'The book is an indispensable tool for anyone attempting to come to terms with the extremely complex and highly variable resolution of the Cypriot mortuary record. ...Keswani presents a compelling case for moving beyond interpretation of 'prestige good' towards a more holistic approach incorporating the actions of the living in reconstructing society from mortuary practices.'
Antiquity, Volume:79 (Sept 2005)

'This is a well-structured book on a complicated yet intruiguing matter: The reconstruction of social structure and meanings from funerary rituals handed down via archaeological investigations.'
American Journal of Archaeology-Online Book Reviews, 110.4 (October 2006)

'This is a significant contribution to mortuary studies in general and the Mediterranean Bronze Age in particular.'
Bibliotheca Orientalis LXIII

'Setting the burials within a social context or, vice versa, reconstructing social changes against the background of observable mortuary changes has resulted in a fascinating account of pre-historic Cyprus, the like of which one rarely encounters.'
John G. Younger, University of Kansas, Journal of Near Eastern Studies, Vol 67, No. 3