Intonation in the Grammar of English 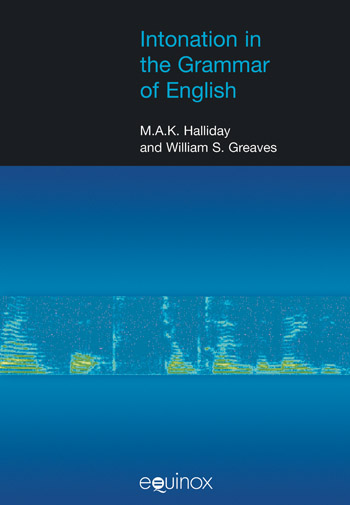 Intonation in the Grammar of English is written for scholars who are interested in language, but not necessarily linguists or phoneticians. The introduction covers speech sound, locating it in relation to other phenomena and disciplines, discusses its representation and interpretation, and introduces the systems and strata which frame its analysis in terms of systemic functional linguistics. The three kinds of meaning - textual meaning (relating language to its ever changing context), interpersonal meaning (allowing us to enact our social exchanges with others) and ideational meaning (construing the logic through which we represent the world we live in) - are each achieved in part through intonation. We make these meanings through choices: in terms of locating the main rise or fall in an intonation contour; in terms of fitting an intonation contour to part of a clause, to a whole clause, or to more than a clause; and in terms of the shape of the intonation contour.

Sound and video files are available providing examples of the systems of intonational choices presented in the book, and also giving examples of these systems being drawn on in different dialects of English, and in the many different exchange situations in which speakers find themselves in the course of a day (contact publisher for details).

'Intonation in the Grammar of English is a very modern book in the sense that it is ... not just a text but encourages the reader to be interactive. The book is for a reader who wants to know in detail about intonation features of English and how this interacts with the grammatical structure of the language.'
Michael Pace-Sigge, University of Liverpool, BAAL News, NO. 98, Summer 2011

'Intonation in the Grammar of English presents a mature presentation of the SFL description of intonation within the English language, one that has benefited from the collaborations with and inputs from communities of scholars both within and outside of the SFL tradition, including scholars working from the perspectives of other disciplines. This maturity can be seen in the variety of perspectives from which intonation is presented – as sound, as physical and (neuro-)biological phenomena, as organization of sound, as formal grammatical systems and as meaning in context – and particularly in the integration of such a variety of perspectives within a coherent, accessible account. It is in the integration of an established theoretical understanding with the ever-renewing novelties of technical resources and interdisciplinary perspectives that this book offers a most promising approach to twentyfirst-century study of sounds (and other modalities) as meaning-bearing phenomena.'
Bradley A. Smith, Linguistics and the Human Sciences 4.1 (December 2010)

The material provided on the accompanying CD is of very great value, especially since non-specialists are mostly obliged to take intonational analysis on trust.
Journal of English Language and Linguistics, Vol 14/1

'I consider this to be a landmark study. The fusion of human and technological perception with grammatical analysis -- and always, the 'return to the data' -- results in an exceptionally lucid and scientific work. I believe it will provide a source of insight to linguists and language teachers for many years to come.'
Ross Forman, University of Technology, Sydney, in Australian Review of Applied Linguistics, Vol 32, No 2 (2009)

'I have always appreciated the way that Halliday integrated intonation with the rest of language -- into the phonology, grammar and discourse structure of a language. At long last, a new presentation of his description of English intonation has appeared. This new work is aimed at both students who are novices in the study of English, and to scholars who are au fait with trends and approaches in phonology and linguistics in general.'
Paul Tench, Cardiff University, Functions of Language, 17:2 (December 2010)