The Western Classical Tradition in Linguistics 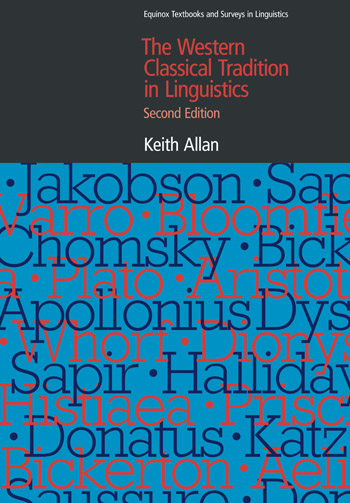 The Western Classical Tradition in linguistics extends from Ancient Greece to the 21st century and has spread from Europe to the other four inhabited continents. It is a story of successive stages of language study, each building upon, or reacting against, the preceding period. There is a theoretical track passing through Plato, Aristotle and the Stoics to the scholastics of the later middle ages; on to the vernacular grammarians of the renaissance, then the rationalists and universal grammarians of the 17th, 18th and 20th centuries. Joining this, is a tradition relating language to thought handed on from Epicurus and Lucretius to Locke, Condillac, Humboldt, Saussure, Boas, Sapir, Whorf and today’s cognitivists. There is at the same time a pedagogical track deriving from the Greek grammarians Dionysius Thrax and Apollonius Dyscolus via the Latins, Donatus, Priscian, and their commentators; a track that gives rise to prescriptivism and applied linguistics. The book’s penultimate chapter examines the re-ascendancy of hypothetico-deductive theory over the inductivist theories of the early 20th century, concluding that both approaches are necessary for the proper modelling of language in the 21st century and beyond. In this second edition there is a new final chapter that traces the history of semantics and pragmatics from earliest times to the present day.

'The history of linguistics in this book is at once disciplined, informative and readable. It contains an absolute wealth of very clearly presented linguistic analyses which enable the reader to get a real handle on how the very large cast of actors assembled here did their daily linguistics. It should become for many an indispensable compact tool of reference and a source book. '
Gordon Taylor, Monash University, Australian Journal of Linguistics, Vol. 29, No. 3 (September 2009)

‘Allan has given us an excellent and well-documented account of western linguistics from the Greeks (and sometimes before them) until current trends on the topic such as pragmatics and cognitive linguistics.’ Historiographia Linguistics XXXV:1/2