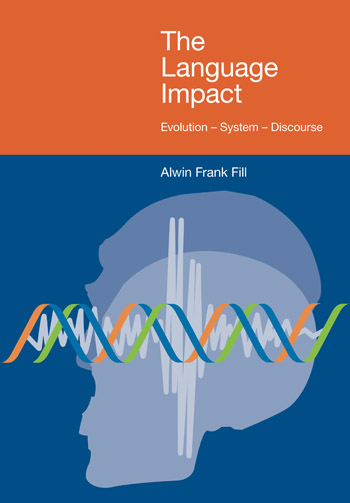 The wheel, the steam-engine and the internet may have made our lives easier. But what about our ‘invention’ of speaking and writing? Has not language given us cooperation, which has made all other achievements possible? Its evolution, the author claims, has had the impact of a meteorite stirring up a cloud which is still spreading out further and further even today.

Is our thinking (and hence acting) really at the mercy of our language, as Whorf maintains, or do we think independently of language, as Steven Pinker claims? Linguistic determinism and relativity, but also mentalese approaches are discussed in the central part of the book.

‘Verbal caress can be more stimulating than manual.’ The language impact makes itself felt in the most intimate of situations. But do not words like foreplay and penetration describe love-making only from the male point-of-view? Can we change the way society conceives of women and men – by changing language, or at least by making people aware of its power?

With language, we can make things happen, we can influence, even manipulate other people. But language misunderstood can have disastrous consequences. July 1945: The mistranslation of Japan’s answer to the US ultimatum may have been responsible for the atom bombs falling on Hiroshima and Nagasaki!

This book is a long overdue survey of all the effects of language on the three levels of evolution, system and discourse – and of what thinkers have written about them. From Plato’s critique of Sophistry to Bacon’s idola fori, Humboldt’s ‘language is energy’, and finally Wittgenstein’s ‘language games’ – the 21 chapters of the book deal critically with the power of language and what philosophers have said about it. A glossary of terms and an annotated list of thinkers make this book easy to use.

‘As a comprehensive survey of what must be top of the agenda for any socially and environmentally committed linguist or student of linguistics, this book is second to none.’
Professor Andrew Goatly, Department of English, Lingnan University, Hong Kong

‘The breadth of humanities disciplines covered in the book is phenomenal: philosophers, (social) psychologists, humorologists, sociologists, discourse analysts of every possible hue, psychotherapists, not to mention innumerable linguists, hyphenated or otherwise, perform on his adroitly erected stage. The diverse scholarly sources tapped and incorporated into this well argued book are very aptly chosen. The overall rhythm and chain of argument together with the examples and quotations given to illustrate the phenomenon of language and discourse’s variegated impact are extremely persuasive. Both beginning students of language and linguistics and also common readers will be able to benefit from its not inconsiderable insights and erudition, as well as committed fellow researchers.’
Professor Richard Alexander, Wirtschafts Universität Wien

'Since the book accommodates insights from various scholarly paradigms, readers from all disciplines related to the Humanities (“Geisteswissenschaften”) will benefit from the ideas collected and discussed by the author. Linguists will particularly appreciate the perspective from which Fill looks at their object of study: The Language Impact does not primarily show what language users do with language (pragmatics) and to language (grammar), as standard linguistic research does, but reverses the perspective and explores what language does to its users. The book is theoretically precise and well-structured and thus also serves as a solid overview for advanced students on how language changed human existence on this planet (both in a positive and negative way) and, moreover, how the different views on its function and use changed through time with each new school or prevalent “-ism” (e.g. British empiricism, structuralism, constructivism, or functionalism). Finally, it is of crucial interest to those concerned to help develop impact linguistics into an established scholarly discipline.'
ANGLIA, Volume 130, Number 2, 2012