Buddhist Monks and the Politics of Lanka's Civil War 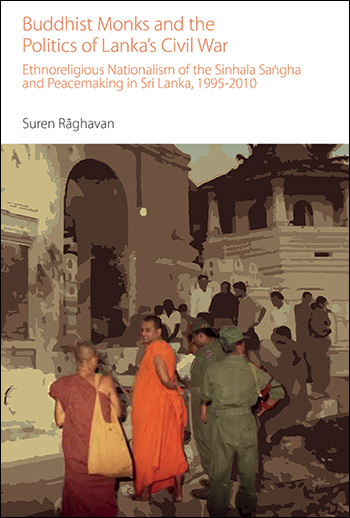 The war in Sri Lanka was violent and costly in human and material terms. This was one of the longest wars in modern South Asia. Often referred to as an ‘ethnic’ conflict between the majority Sinhalas and the minority Tamils, the war had a profound religious dimension. The majority of Sinhala Buddhist monks (the Saṅgha) not only opposed any meaningful powersharing but latterly advocated an all-out military solution. Such a nexus between Buddhism and violence is paradoxical; nevertheless it has a historical continuity. In 2009 when the war ended amid serious questions of war crimes and crimes against humanity, monks defended the military and its Buddhist leadership. Taking the lives of three key Saṅgha activists as the modern framework of a Sinhala Buddhist worldview, this book examines the limitations of Western theories of peacebuilding and such solutions as federalism and multinationalism. It analyzes Sinhala Buddhist ethnoreligious nationalism and argues for the urgent need to engage Buddhist politics – in Lanka and elsewhere – with approaches and mechanisms that accommodate the Saṅgha as key actors in political reform. Sinhala Buddhism is often studied from a sociological or anthropological standpoint. This book fills a gap by examining the faith and practice of the Sinhala Saṅgha and their followers from a political science perspective.

This is a fine study of the political role of Sinhala Buddhism, especially its monastic order, in Lanka’s post-independence experience of defining statehood and the place therein of minority cultures and religions. The focus is on the turbulent era between 1983-2009 marked by violent struggle (largely supported and encouraged by the Buddhist clergy) between the state and the Liberation Tigers of Tamil Eelam. The book makes a major contribution to an understanding of why the powerful Buddhist sangha (with some important exceptions) has such a visceral response to a proposed notion of Western-style federalism as an answer to Lanka’s political travails, and how the international community failed (and still does fail) to adequately understand this.
Bruce Matthews, Emeritus Professor of Comparative Religion, Acadia University, Nova Scotia

Dr Raghavan’s important book is the result of many years of research about the political problems in Sri Lanka, but it is also the result of his personal engagement with these issues. This is a critical and engaged scholarly book that should be read by all those interested in the role of Theravda Buddhism in politics.
Torkel Brekke, Deputy Director and Research Professor, Peace Research Institute Oslo