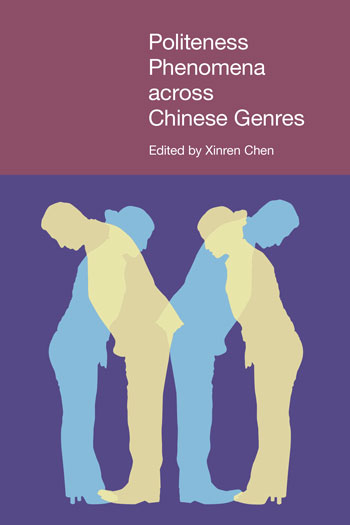 Unlike existing studies which treat Chinese politeness phenomena as non-varying this study provides systemic evidence for how linguistic polite behaviour varies across genres in China. These intracultural variations which are investigated in the volume include addressing, backchanneling, identity construction and rapport management which are subject to the influence of genre differences such as formality of occasion, media and channel of communication, presence or absence of interlocutor or third party and role-configurations. The volume offers those who read or write Chinese texts or engage in Chinese conversation an enriched knowledge of how politeness as the most important type of interpersonal meaning is communicated in different genres in that language.

A much welcome addition to the ongoing exploration of Chinese politeness, as well as politeness research in general. It also has significant implications to cross-cultural pragmatics, and intercultural communication.
From the Foreword by Yuling Pan

This volume is well-structured and functions as a comprehensive survey of research in Chinese politeness. It revisits a pervasive phenomenon in language – politeness, which has been studied in depth in the past three decades. Filling a gap in politeness research, in particular in Chinese languages, this volume has several strengths. First of all, it is the first collection of articles to focus on how linguistic behaviours towards politeness vary across genres in contemporary Chinese languages, covering not only face-to-face and written forms of communication but also those in computer-mediated contexts. Furthermore, the volume focuses on intracultural variations in discursive strategies across different types of interaction, including introduction, identity construction, rapport management and backchannelling. The volume is also innovative, as it embraces diverse approaches to politeness and a range of naturally occurring data. Rather than adhering to a single model or paradigm, this volume adopts theoretical modules of Leech’s (2014) GSP, Brown and Levinson’s (1987) Face Theory (FT), Spencer-Oatey’s (2000) Rapport Management Model (RMM) and Constructivists’ views of politeness (Arundale, 1999; Haugh, 2007; Kádár and Haugh, 2013; Watts, 2003).
Discourse and Communication