Legacies of the Occult 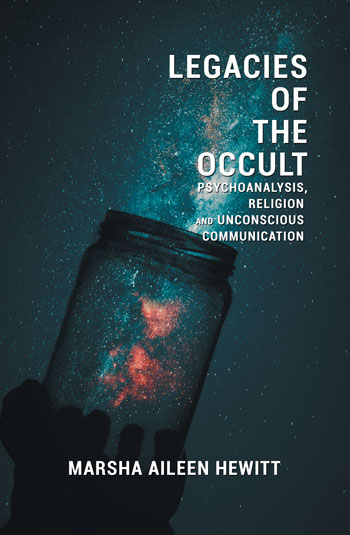 In Legacies of the Occult Marsha Aileen Hewitt argues that some of the leading theorists of unconscious communication represent a ‘mystical turn’ that is infused with both a spirituality and a revitalized interest in paranormal experience that is far closer to James and Myers than to Freud.

I found this book profound, brave, fair, and often genuinely moving. I felt myself in confident and sure hands with Hewitt’s intellect, prose, and analysis.

One of the book’s and the author’s great virtues, or acts of courage and humanity, is that the conversation opens out onto a new field of inquiry that is really quite old (the paranormal, the occult, the magical) and, as such, attempts to make some better sense of an entire spectrum of human experience that has been ignored, or just mocked, in the modern academic world. A number of us have been intuiting or orbiting around these strange phenomena for some time (and I detect a real quiet renaissance here, in which Hewitt’s book will certainly participate), but in a way that generally lacks the broader history of psychology and therapeutic frameworks that Hewitt provides with such precision and richness.
Jeffrey J. Kripal, J. Newton Rayzor Professor of Religion, Rice University

Hewitt (Univ. of Toronto) looks at three early theorists of occult psychological phenomena, William James, Sigmund Freud, and Frederic W. H. Myers, to offer an updated account of what the (often hidden) presence of occult phenomena means for the field of religious psychology today. Early postulations of phenomena such as thought transference (telepathy) are shown to inform the ways that an increasing number of scholars of religion and psychology are rethinking the range of human experience to include aspects of existence that have been ridiculed in the recent past. In a review of her 2014 work Freud on Religion, Hewitt drew praise for having restored "attention to the contribution of Freud’s thinking to the contemporary study of religion" (CH, Jan'15, 52-2829). A central question of emerging concern here is how religion and, for that matter, psychology will continue to be relevant as ways that, to paraphrase the German philosopher Habermas, normalize human interaction with what is extraordinary. This book offers a rich account of the place of the occult in psychoanalysis, psychology, and religion and will appeal to readers interested in not only the history of psychology or psychoanalysis but also the history of ideas more generally.
Summing Up: Recommended. Upper-division undergraduates. Graduate students, faculty, and professionals.
CHOICE