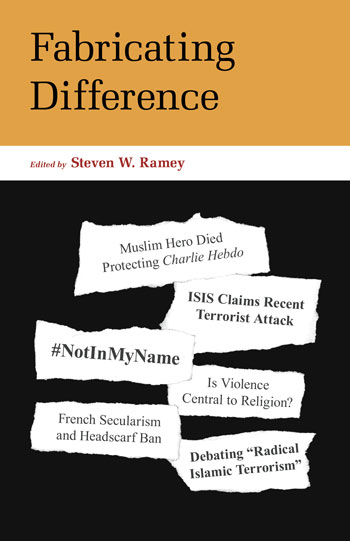 The fabrication of groups as different, as other, often has significant consequences, including violence and discrimination. This volume focuses on the discourses that construct Islam in the aftermath of traumatic events and thus illustrates how academic analysis of the fabrication of difference can contribute significantly to public discourse.

It centers on two critical analyses by accomplished scholars who have written publicly on the constructions of Islam and Muslims as others. Mayanthi Fernando analyzes the rhetoric surrounding French laïcité (often translated as secularism) in the aftermath of the attack on Charlie Hebdo in Paris in 2015, highlighting the ways the majority uses the language of laïcité to diminish the presence of minorities. Aaron Hughes analyzes how scholars and others construct Islam in response to acts of violence attributed to people who identify with Islam, thus illustrating how critical academic analysis can contribute to the understanding of both the contestation and ideology behind groups such as ISIS.

Ten early career scholars apply and extend the questions and approaches of these central essays in short reflections that apply these issues in new ways to other contexts (e.g., India, the United States, early Christianity) and topics (e.g., social issues in politics, religion vs. non-religion, nationalism, scholars in public discourse). The volume concludes with a substantive Afterword that broadens from these specific current events to present an extended analysis of the fabrication of difference and the ways recognizing these processes should influence our scholarship and our engagement with public discourse.

In addressing the ways people construct difference and the Other, this volume, therefore, provides one answer to the question of the relevance of these fields in a period of both political challenge and internal critique of the assumption of the universality of academic research.

Working with Culture on the Edge

The collection highlights differences between social and religious groups, but Ramey argues that the same processes apply to conceptual categorization more generally. One of the lasting lessons of structuralism is that all meaning is based on difference: difference is always already present and constructed. The other lesson is that this insight does not translate easily into a research program. Relations between the discursive construction of social differences and specific social processes need to be nailed down to begin with. In this light, Fabricating Difference is a valuable conversation starter.
Reading Religion