An Exploration of Writing 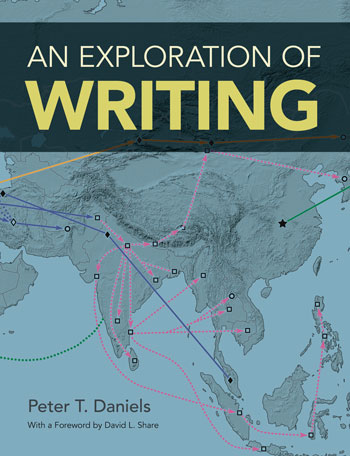 An Exploration of Writing is a book about our alphabets, our syllabaries, and all the other kinds of writing that people use and have used for 5000 years. It introduces the general public to a topic that hardly anyone has heard about, so it clarifies basic linguistic terms as they occur. For linguists exploring the growing field of graphonomy—the study of writing systems—in which the author has long been a pioneer, it weaves together the many threads of theory into a tapestry showing a fuller picture of what all our scripts are seen to share.

An Exploration of Writing begins with more familiar kinds of writing considered in unfamiliar ways—starting with English viewed syllabically—and leads the reader across the Old World and the New to less familiar kinds of writing, showing how all writings share a fundamental essence, however diverse they appear to be, because all writing represents language. The more familiar (Hebrew, Chinese, Korean) leads on to the less familiar (Udi, Pahlavi, Javanese). Featured are some of the world’s most recently elucidated scripts, and some that are long known but long neglected, such as those for Central Asian languages, and some of the most recent interpretations of long-mysterious scripts, such as Sumerian and Mesoamerican.

An Exploration of Writing is in the tradition of and in part a response to A Study of Writing (1952/1963), by I. J. Gelb. It encapsulates more than thirty years of the author’s work and his dozens of articles on writing systems, ranging from investigating the physical process of writing to bringing to light the achievements of those who had deciphered forgotten scripts to developing a theoretical approach to the origins of writing which leads to insights into the nature of writing itself.

Peter Daniels has thought more and more deeply about writing than anyone else around. This very engaging book reflects both. It incorporates the taxonomy of types of writing systems that he pioneered and is organized very nicely around the various ways in which a writing system reflects its (spoken) language. The book presupposes little linguistic knowledge and is clearly written.
Professor Mark Aronoff, Stony Brook University

No student of linguistics, nor educator, psychologist, or social scientist concerned with literacy, can afford to remain ignorant of the fundamentals of writing systems. It is a great honor to commend to the reader a work of such exceptional scholarship.
Professor David L. Share, University of Haifa (from the Foreword)

Daniels’ new book has much to recommend it. In many ways it represents the culmination of a career by, as noted above, the scholar who can lay the best claim to being the world’s expert on writing. The breadth of coverage, and the organization of the material is the best that I have seen.... An Exploration of Writing will be useful to scholars and students alike, and belongs on the shelf of anyone who is interested in this rather neglected subfield of linguistics.
Written Language and Literacy

Although dealing with many different types of script (ancient and modern), a clear central concern runs through the different chapters which keeps the reader focused until the very last page. That concern is with the ways in which human language – a continuous stream of sound – has been perceived, by people of widely different times and places, as consisting of discrete phonological units, and with the ways in which such units have been represented by equally discrete graphic signs.
The range of different scripts discussed, and the languages expressed by them, is impressive.
Bibliotheca Orientalis

A veritable tour-de-force. There is no comparable survey written by a top specialist with the purpose of revealing structural similarities in language encoding by writing systems and dispelling several key misconceptions along the way. Its conclusions are thoughtprovoking and consequential. This book is a must-have, although its actual audience is somewhat narrower than intended. As a course textbook, however, it requires contextualization and extra readings.
Journal of Near Eastern Studies