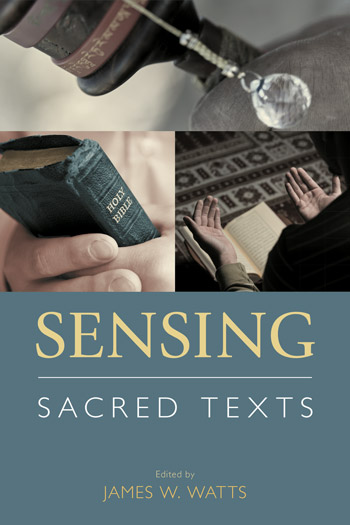 All the human senses become engaged in ritualizing sacred texts. These essays focus especially on ritualizing the iconic dimension of texts through the senses of sight, touch, kiss, and taste, both directly and in the imagination.

Ritualized display of books engages the sense of sight very differently than does reading. Touching gets associated with reading scriptures, but touching also enables using the scripture as an amulet. Eating and consuming texts is a ubiquitous analogy for internalizing the contents of texts by reading and memorization.

The idea of textual consumption reflects a widespread tendency to equate humans and written texts by their interiority and exteriority: books and people both have material bodies, yet both seem to contain immaterial ideas. Books thus physically incarnate cultural and religious values, doctrines, beliefs, and ideas.

These essays bring theories of comparative scriptures and affect theory to bear on the topic as well as rich ethnographic descriptions of scriptural practices with Jewish, Sikh, Muslim, Christian, Buddhist and modern art and historical accounts of changing practices with sacred texts in ancient and medieval China and Korea, and in ancient Middle Eastern and Mediterranean cultures.

Sensing Sacred Texts, edited by James W. Watts, offers a feast for the eyes and the imagination by introducing its readers to a range of ways that sacred texts engage the senses of those who read, hear, venerate, taste, touch, smell, and look at them. The third volume in a series from Equinox Publishing on “Comparative Research on Iconic and Performative Texts,” the book’s ten essays examine examples of the sensory dimension of scriptures in Christianity, Judaism, Islam, Buddhism, and Confucianism, and undertake a broader consideration of the sacred status attributed to texts – and to books in particular – in religious and secular cultures alike. Not only do the essays highlight the crucial role played by the material qualities of sacred texts for processes such as identity formation, the establishment of cultural boundaries, and the recruitment of affect, the volume’s thirty-eight full-color images will make you want to reach out and touch, taste, or smell the sacred texts in question for yourself.
Reading Religion

An important contribution to the study of sacred texts, both on a descriptive, analytical and theoretical level. This collection of essays will likely appeal to scholars interested in religious practices relating to sensing sacred texts and how the sensory element relates to the semantic dimension.
Anthropos