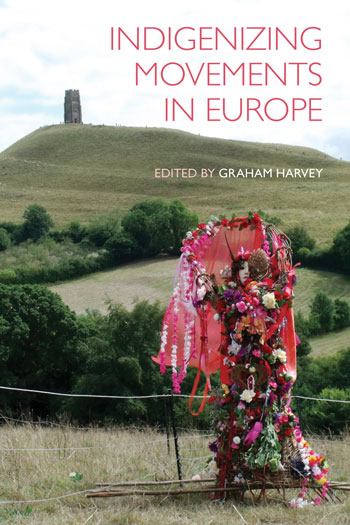 Since the mid-twentieth century, religious movements identifying themselves as Paganism, shamanism, native faiths and others have experimented with two forms of indigeneity. One arises from claims to be reviving or re-presenting previously hidden religious practices from ancestral or pre-Christian times. The other form of indigeneity is found in lessons learnt (directly or indirectly) from Indigenous peoples (especially Native Americans and/or Siberians). In the last decade in particular these two trends have sometimes fused in what we call “indigenizing movements”. This book tests the interpretive and methodological value of this.

“Indigenizing” was coined by Paul C. Johnson in a discussion of lowland South American and Caribbean religious traditions as the opposite end of a continuum from “universalizing”. The continuum recognises tendencies to emphasise resonance with and relevance to local and ancestral traditions (indigenizing) and tendencies to stress universality or global engagement. These need not be dualistically opposed and are most likely to be matters of stress. Those who conceive of themselves and their cultures as maintaining and enhancing discrete ethnic, cultural or religious communities may represent one trajectory. Others not only assert that they have something to say to the rest of the world but may also seek to revise “local ancestral” traditions in the light of more global traditions. We might recognise a tension here between “Indigenous” and “World” religions but the contributors to this volume contest the value of that categorisation of what are, in reality, more dynamic and fluid realities.

The chapters test a differently conceived tension: that between indigenizing and universalizing. This experimentation is propelled by examining European originated movements in which engagements with Indigenous animistic, shamanistic or “nature venerating” traditions are employed in self-conceptions and in the discourses of identity formation, maintenance and dissemination. Seven main chapters test aspects of our key theme by focusing on specific movements or phenomena. These are followed by a responsive afterword considering the effects of applying a notion coined for the critical examination of Indigenous South American and Caribbean religions to the different context of European movements.

The book aims to enhance understanding and enrich debate not only about evolving European movements but also about the concept and practice of Indigeneity, indigenizing and of scholarly practices in relation to such phenomena.