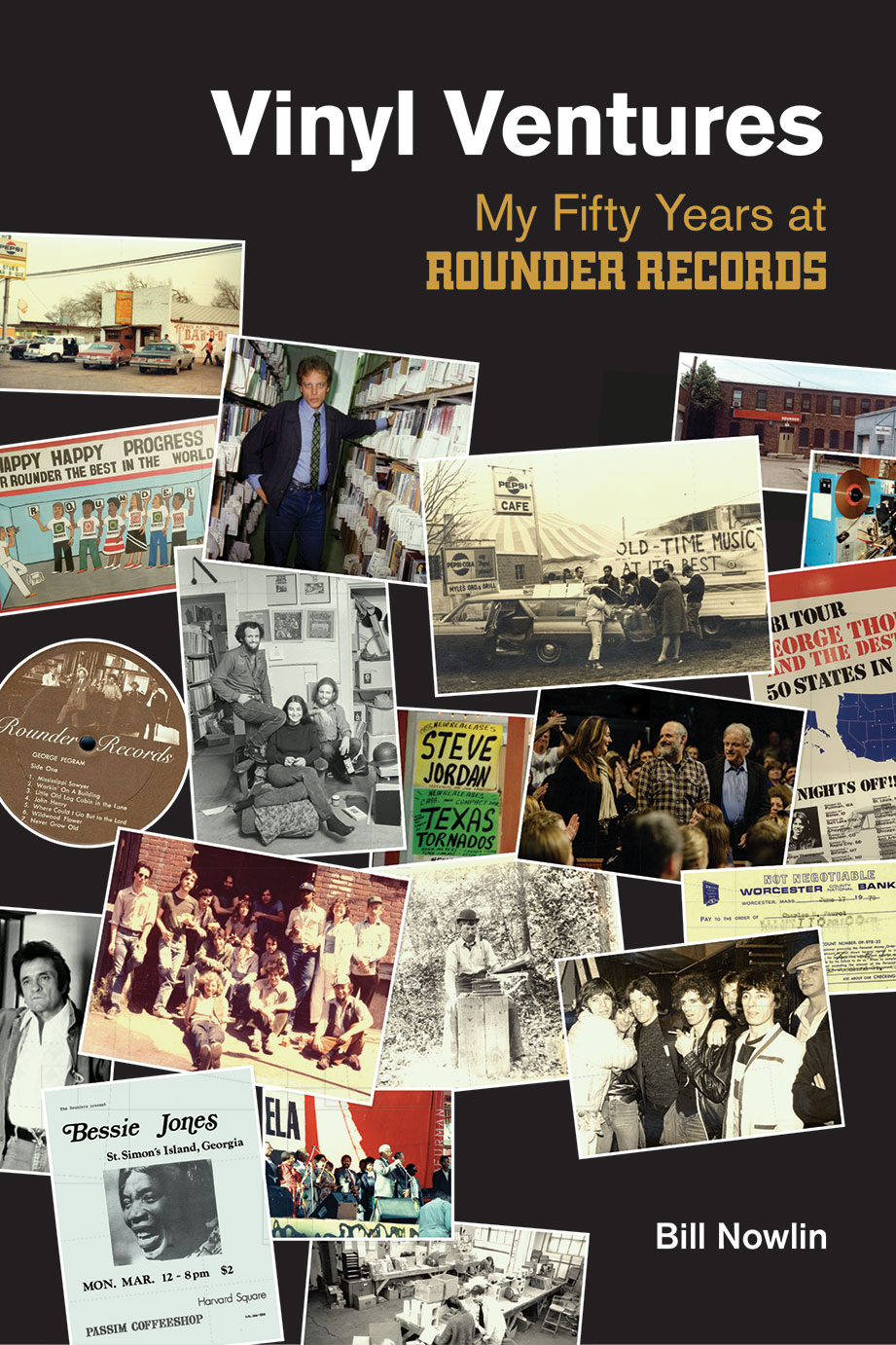 Vinyl Ventures: My Fifty Years at Rounder Records is less a standard history and more an idiosyncratic memoir written by one of the three Rounder founders.

Rounder Records was born in 1970, a “hobby that got out of control,” a fledgling record company more or less conceived when vinyl still reigned, while the Sixties were still in flower, and which began publishing on a shoestring budget of just over $1,000. Founded by three friends just out of college, the Boston-area company produced over 3,000 record albums, the most active company of the last half-century, specializing in roots music and its contemporary offshoots. Rounder won fifty-six Grammy Awards and documented a swath of music that in many cases might otherwise never have been presented to a broader public. It’s arguably a quintessentially American success story.

This book focuses on the early years up to and just through when Rounder evolved to a second stage, with a generational change that has kept the label healthy and flourishing when so many other cultural enterprises from the era have folded or gone dark. It includes original photographs taken by the author or drawn from the Rounder Records archives. It’s the story of three people with no background in business who took an idea and, through hard work and passion, built something of lasting cultural significance.

The ebook editions contain numerous hyperlinks to music featured in the text so that readers will be able to listen along.

Nowlin... writes with warmth and candor, of the initial fuel that lit up their hobby-turned-business. The book offers a glimpse into a time and place in music, both locally and nationally, and what comes across is Nowlin and the rest of the gang's dedication to getting music they loved into the ears of more people, and honoring the artists with their packaging, liner notes, and commitment to them over their careers. It's a lively history of a business, of roots and Americana music, and the changes over the last half-century of recording and releasing.
The Boston Globe

What a fabulous read. So much of my young life in the folk community echoes in the early days of this story.
It’s a wonderful and informative read. Everyone who loves folk music should join the Rounder journey.
Betsy Siggins, Past Director of Club 47 and Passim Founder, Folk New England Archives

A detailed and engaging account of one of the most impactful independent record companies of all time. Drawing upon his keen memory and plying a brisk, emphatic prose style, Bill Nowlin provides herein the ultimate insider's perspective on the rise to prominence of Rounder Records, achieved through the aspiration, persistence, curiosity, serendipity, and teamwork of three lifelong friends: Nowlin, Ken Irwin, and Marian Leighton Levy. These three “Rounder Founders” contributed their individual skills and musical passions to their collective project: a DIY record company that forever changed the ways people perform and appreciate American and international roots music. Rounder's legacy – thousands of albums released over the past half-century featuring stellar amateur and professional musicians and showcasing the full spectrum of vernacular music genres and traditions – reverberates in beloved soundwaves that continue to entertain and transform people nationwide and worldwide. This book – written by Nowlin yet incorporating insights from Irwin and Leighton and others – tells the full story behind that remarkable legacy.
Ted Olson, Professor, Appalachian Studies, East Tennessee State University and seven-time Grammy nominee

This trio really deserves congratulations for a job well done and enormous credit for being a successful family. They not only learned but knew how to execute all the ins and outs of the record biz without sacrificing the best interests of their adopted charges. They kept their ears and eyes on their original goals of being good stewards of the world’s ever-evolving regional or natural folk musics!
Chris Strachwitz, Arhoolie Records

Bill Nowlin, one of three Rounder Founders has written the entire story of Rounder Records from close up. The book shows some of the quirks and idiosyncrasies of a writer broadly interested in the world of music and a world beyond, without ever losing its focus on the birth, development, and integrity of its subject, a record label of distinction and longevity.

A problem with books like this one is the possibility of becoming mostly a list of artists recorded, trips taken, awards won, problems overcome, and changes made. All those elements lie within this highly readable account, yet it includes the human experiences of the Rounder Founders as they built a recording empire based on their enthusiasms while including the broad range of interests they pursued. Their recorded music and choice of artists reflected and taught the world the broad range of music and cultural experience available, exposing the musical roots of who we are as people and who we can become. Therein lies the thrill and the charm of Vinyl Ventures.
Ted Lehmann, Ted Lehmann's Books, Bluegrass and Brainstorms blog

Unrepentant folkie and writing over a number of years, Nowlin successfully communicates the wonder he felt as he discovered the folk scene of his college environs (including the cliquishness common to the setting), and his near-evangelical commitment to the music as he delved deeper into and became immersed in its traditions and history.
For those of us who 'missed' much of the roots happenings of these formative years—for example, I only started to encounter Rounder releases in the mid-80s—there is a wealth of colourful stories shared, from the Lilly Brothers, George Thorogood (several pages documenting the way the Delaware vocalist and guitarist came to the attention of the label, their investment in his career including the 50 shows in 50 days tour, and their subsequent work to get him to wider attention on a major label), Red Allen, Irma Thomas, Alison Krauss, and others.
I've enjoyed reading this book over the last couple weeks, and I learned a lot—like I was wise to not follow through on my plan, written on the back of a Waskasoo Bluegrass postcard in 2003, to start a small record label and production company focused on Canadian bluegrass and folk music—and was engrossed almost the entire time while reading.
Country Standard Time