Ancient Cookware from the Levant 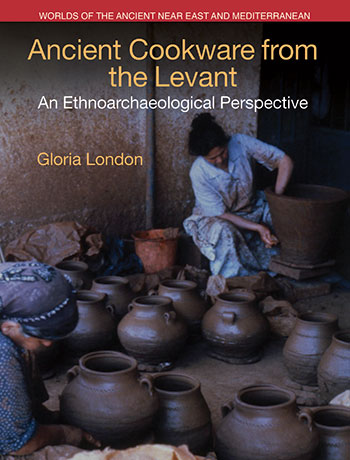 Ancient clay cooking pots in the southern Levant are rough in texture and not easily associated with meals known from ancient writings or iconographic representations. To narrow the gap between excavated sherds and ancient meals, the approach adopted in Ancient Cookware from the Levant starts by examining the way food is traditionally processed, preserved, cooked, and stored in clay containers. This research is based on the cookware and culinary practices in traditional societies in Cyprus and the Levant, where a handful of people still make pots by hand.

Clay pots were not only used to cook or hold foods. Their absorbent and permeable walls stored traces or memories of food residue and bacteria. As a result, clay jars were automatic yogurt makers and fermentation vats for wine and beer, while jugs were the traditional water coolers and purifiers. Dairy foods, grains, and water lasted longer and/or tasted better when stored or prepared in clay pots. Biblical texts provide numerous terms for cookware without details of how they looked, how they were used, or why there are so many different names for them. Studies of potters carried out over the past century in the southern Levant provide a wealth of names whose diversity helps to delineate the various categories of ancient cookware and names known from the Bible.

Ancient Cookware from the Levant begins with a description of five data sources: excavations, ancient and medieval texts, 20th century government reports, early accounts of potters, and ethnoarchaeological studies. The second part of the volume focuses on the shape, style, and manufacture of cookware for the past 10,000 years. For archaeologists, changes in cooking pot morphology offer important chronological information for dating entire assemblages, from Neolithic to recent times. The survey of pot shapes discusses the way the different shapes were made, used, and cleaned.

Ancient Cookware from the Levant is a key piece in the puzzle of ancient food preparation in the southern Levant and is a necessary addition to any library or collection on the subject.
Biblical Archaeology Review

L.’s ethnographic observations lead to a convincing explanation for the prohibition of cooking a kid in its mother’s milk, and she demonstrates how continuity and change in pottery are due to the practicality and functionality of cookware, rather than historical, social or political change. A valuable and rigorous contribution to the archaeology of the Levant.
Journal for the Study of the Old Testament

The book is an important supplement which should be essential reading not only by archaeologists who specialise in ceramics but also by anyone who studies the biblical world.
Zeitschrift für die Alttestamentliche Wissenschaft

Ancient Cookware from the Levant is an extraordinary volume that brings together decades of ground-breaking research by one of ethnoarchaeology’s most notable and accomplished ceramic experts. High production values and copious illustrations make this a volume of standout quality destined to become a fundamental reference text for ceramics specialists of the ancient Near East and beyond.
Ethnoarchaeology

London successfully combined ethnoarchaeological research, written sources, and a large-scale review of archaeological finds. By doing so, London succeeded in bridging the gap between the current ethnoarchaeological research and the behavioral study of daily life activities as manifested with clay-made cooking vessels. The book supplies more useful tools for the arsenal of anyone interested in the ancient Near East, and her research will hopefully be used by the scholarly community in the coming years.
Journal of Near Eastern Studies