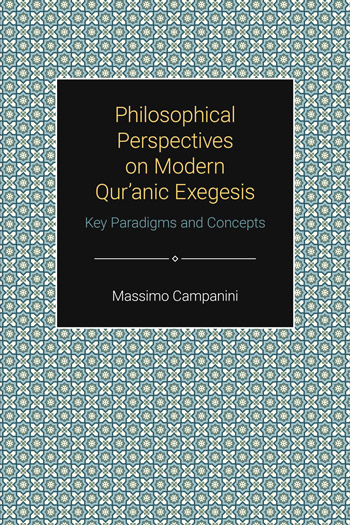 This book explores the possibility of a hermeneutics of the Qur’an. It starts from the presupposition that the Qur’an can be studied as a philosophical book. Thus the analysis is theoretical more than historical. Many philosophers commented the Qur’an and many supported their theories by resorting to the Qur’an. Thinkers like Fakhr al-Din al-Razi connected traditional theology and philosophy in their Qur’anic commentary. Others like Nasr Abu Zayd used philosophy to deconstruct the Qur’an paving the way for a modern humanistic hermeneutics. This book tries to go a step further: it aims to offer a path within the Qur’an that – through philosophy – leads to a fresh understanding of fundamental tenets of Islamic thought, most importantly tawhid - God’s oneness - and to a fresh reading of the Qur’anic text. This book applies the phenomenological and ontological hermeneutics of Edmund Husserl and Martin Heidegger to the study of the Qur’an going far beyond Annemarie Schimmel’s phenomenological approach that is neither philosophical nor properly phenomenological (in Husserl’s sense).

This is an innovative and valuable addition to the growing literature on the Qur’an and philosophy and is worth serious attention.
Philosophy East and West

This book is, without a doubt, Campanini's own great contribution to the ongoing hermeneutical applications to the Holy Text. Campanini's book will find its way to philosophical and theological seminars in the field of contemporary Islamic thought, owing to the ideas expressed with balance, nuances, and its profound informative structure.
Synthesis Philosophica

The Qur’an can be considered as a philosophical book: it does not contain only theological truths. The new exegetical approach which applies philosophical tools to the Qur’an is perhaps definable as “Philosophical Qur’anology”, a neologism I coined along with the “Philosophical Christology”: as Jesus Christ in Christianity is the object of thought, so in Islam the Qur’an can become the object of thought, being the role of Christ in Islam played by the Qur’an. I chose phenomenology in order to study the pivotal philosophical principle of Islam: the Oneness and Uniqueness of God.
Extract from an interview with the author appearing in Corriere del Trentino 26 November 2016

This is an excellent introductory text for students researching the field of hermeneutics, Qur’an and Islamic studies. The style and use of language is consistent and unambiguous. The author develops the argument by easing the reader into the field, as he builds up the core philosophical tools to be utilised in the examination of the Qur’an. He presumes only that the reader is conversant with major terms in the fields of philosophy and Islamic (Qur’anic) studies and has some awareness of the arguments and discussions in the field. Overall, this is a recommended text for scholars and students seeking to engage with the Quran from a philosophical, or more specifically, a deep intellectual perspective.
The Muslim World Book Review

A condensation of the two enduring research interests—Quranic Studies and philosophy in the Muslim world—of the Italian scholar of Islam Massimo Campanini, with the purpose of presenting the Quran as a book of philosophy. While a relatively slim volume, the book’s coverage ranges wide, with occasional close readings of select samples from the Quran as actual exercises in philosophically informed exegesis and discourse analysis.
Journal of the American Oriental Society