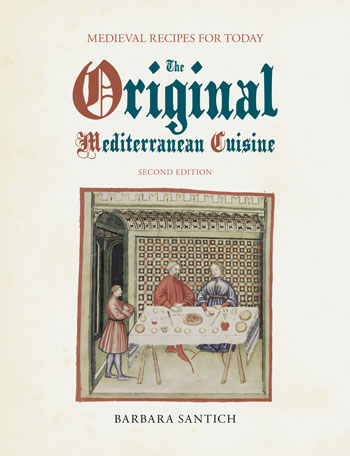 The Original Mediterranean Cuisine is both culinary history and cookbook, with 70 recipes from fourteenth- and fifteenth-century Catalan and Italian manuscripts, adapted for today’s kitchens. Starting with the natural and cultural affinities of Mediterranean Europe, such that a medieval merchant from Italy could be understood in Marseille and Barcelona, it demonstrates the culinary similarities that differentiated this region from northern Europe.

Originally published in 1995, this new edition has been extensively revised and enlarged by a third and is lavishly illustrated with images from medieval texts. It includes new sections on the medieval table and table manners, and discusses the significance of the medieval banquet through a selection of menus.

Reviews of this edition:

A gem of a retrospective on food preparation and service during the Middle Ages, The Original Mediterranean Cuisine sparkles with details. Culinary historian Santich (emer., Univ. of Adelaide, Australia) uses amenable prose suitable for a broad audience to introduce readers to medieval daily life through kitchen hierarchy, food sources, meal protocols, and table manners. A complete reading of Santich’s views supplants histories of power struggles and conflicts with a humanistic approach to medieval culture. The author anticipates reader questions by explaining marination and roasting methods and unusual terms such as verjuice, an acidic flavoring made from unripe grapes. Recipes, adapted from original medieval manuscripts, offer unfussy methods for cooking flesh, fowl, and fish with side dishes. The commentary and recipes reveal European-style customs and tastes in ordinary menus and holiday feasting. Also included is a curated bibliography for those wishing to explore topics in more depth. A valuable text for readers, history students, researchers, and teachers, the book should be a public and school library classic in constant demand.
Summing Up: Highly recommended. All readers.
Choice

Reviews of the first edition:

There are a relative few number of medieval cookbooks on the market today, making Santich's title an important addition to the small amount of literature on the subject. Blending culinary history with recipes adapted for today's cooks, this traces trends in early Mediterranean cooking styles and provides a range of dishes as examples.
Midwest Book Review

A book to be placed both on the history shelves and on the kitchen table.
The Sydney Morning Herald

One of the best books yet to appear for cooks with an interest in early (and often distinctly different) recipes.

The format in which the recipes are presented is impeccable. The adaptation is given first, so that the cook who is simply interested in a usable recipe need go no further; for those interested in what the original recipe really said (or purists who wish to cook the recipe without any "adaptation"), the original follows, with a translation by its side. Further comments on the dish, including suggested variants, and, sometimes, explanations of why the original recipe was not followed more closely, come at the end. When the adaptation does not exactly match the base recipe, there is usually obvious justification: many of these recipes occur again and again in different collections, and variants from a different version are often preferred.
The Medieval Review

A concise and clear introduction to what we know of medieval Mediterranean cuisines... This is well done and the recipes... are well presented.
Petits Propos Culinaires

This book is a feast for mind and mouth.
Fred Ferretti, Gourmet