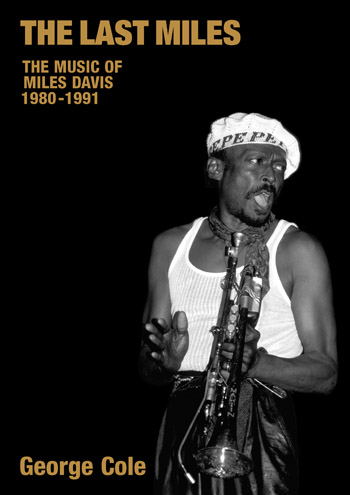 Miles Davis was one of the musical giants of the twentieth century. In a career that spanned more than five decades, Miles transformed the face of jazz four or five times and his music resonates far beyond the bounds of his genre. Miles made the most famous album in the history of jazz, Kind of Blue, formed one of the greatest jazz quintets in the 1960s and fused jazz with rock.

Including unique interviews with dozens of Miles’ closest colleagues, many of whom have never before been interviewed about their time with him, The Last Miles concentrates on the final period of Miles’ life, after he had emerged from a five-year lay-off from the world of music. Right up until the end of his life, he was still searching, still exploring and still refusing to play it safe. The focus is on the music Miles recorded and played, and how it evolved in the eyes of the musicians he played with. Those interviewed include, George Duke, Teo Macero, Tommy LiPuma, Marcus Miller, Darryl Jones, Chaka Khan, David Sanborn, Branford Marsalis, Steve Porcaro and Easy Mo Bee. There are also interviews with musicians who played with Miles before the 1980s, including Dave Liebman, Pete Cosey, Michael Henderson and Mike Zwerin, who give their own assessment of the music Miles played during the final period of his life. Cheryl Davies, Miles’ only daughter, is also interviewed.

The Last Miles is full of fascinating new facts and stories about Miles. For the first time, every member of the group of young musicians from Chicago who helped bring Miles back into the music scene gives their story. Music journalist George Cole also reveals for the first time the full story behind a lost Miles Davis album recorded in 1985, tells you about a song Miles co-wrote for Mick Jagger, how he worked with Prince, and discovers new and unreleased music that Miles recorded. If you’ve ever wanted to know how Miles recruited his band members, what it was like working with Miles in the studio or to play with him on-stage, The Last Miles has the answers. There is at least one chapter devoted to each album that Miles recorded during this period. Full track-by-track descriptions contain many new and interesting tales behind the songs including how Sting came to record on one of Miles’ tracks, why Prince dropped a song slated to appear on the Tutu album, how Gil Evans helped Miles compose many of the tunes on the album Star People, what Splatch means and who Ursula was.

'The best Miles Davis book ever.'
Randy Hall, singer/guitarist/producer, who worked with Miles in the 1980s

'Engagingly written from start to finish, The Last Miles is an essential portrait of Miles' last decade and a strong argument that his music was both valid and perfectly in keeping with a musical philosophy that would ultimately stretch over six decades.'
John Kelman, All About Jazz

'Cole does for Miles' late work what Ian Macdonald's Revolution In The Head does for The Beatles, examining each album in meticulous detail.'
John Lewis, Time Out

'[Miles] comes out of Cole's account larger, warmer and if anything even more important than ever.'
Brian Morton (co-writer of The Penguin Guide to Jazz), The Wire

'For Miles fans, this book is a must.'
Jez Nelson, presenter BBC Radio Jazz on Three

'I really do recommend The Last Miles... it is a fine work.'
John Cavanagh, presenter Radio Scotland's Be-Bop to Hip-Hop

'A great book that plays a great tribute to the last years of Miles' life.'
Erik Telford, presenter Miles Radio

'Cole is a persuasive writer: he prompted me to go and dig out albums that I'd dismissed as inconsequential and listen again with fresh ears... A rewarding read.'
Charles Waring, Blues & Soul

'The Last Miles needs to be covered by working musicians, producers and Miles' fans alike.'
Livingstone Marquis, Straight, No Chaser