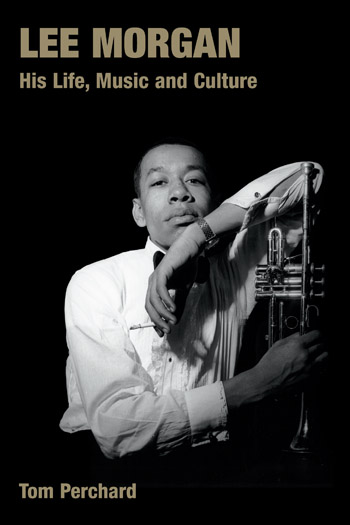 This is the first biography of the jazz trumpeter Lee Morgan (1938-72). He was a prodigy-- recruited to Dizzy Gillespie’s big band while still a teenager, he joined Art Blakey’s Jazz Messengers not much after. By his early twenties Morgan had played on four continents and dozens of albums. The trumpeter would go on to cultivate a personal and highly influential style, and to make records – most notably The Sidewinder – which would sell numbers of copies almost unheard of in jazz. While what should have been Morgan’s most successful years were hampered by a heroin addiction, the ascendant black liberation movement of the late sixties gave the musician a new, political impulse, and he returned to the jazz scene to become a vociferous campaigner for black musicians’ rights and representation. But Morgan’s personal life remained troubled, and during a fight with his girlfriend at a New York club, he was shot and killed, aged thirty three.

Although Lee Morgan lived and died in sensational style, the story told in this book doesn’t just stumble between stages, studios, bars and needles; such a narrative couldn’t do justice to the richness of the trumpeter’s music, nor to the culture from which it came. The events of Morgan’s life are presented here not just as items of biography, but also as points of departure for wider historical investigations that aim to situate the musician and his contemporaries in changing aesthetic, social and economic contexts. This book draws on many original interviews with Morgan’s colleagues and friends, as well as extensive archival research and critical engagement with the music itself.

'Through a wealth of research and incisive anecdote from his band members and close associates, Morgan emerges as an intriguing, multi-layered figure.'
Kevin Le Gendre, The Independent on Sunday

'The whole trajectory [of Morgan's life] ... is handled with impressive confidence. It's clichéd praise, but my first act on finishing the book was to dig out a slew of old Blue Notes.'
Brian Morton, The Wire

'An outstanding achievement… [Perchard] shows himself to be a close listener and a tough-minded critic who can write vividly about the music.'
Ed Hazell, Signal to Noise

'This is a remarkable book and an outstanding contribution to jazz literature ... a very impressive achievement indeed.'
Graham Colombé, Jazz Journal International

'Excellent … [Perchard is] especially good on Morgan's music, analytical but not so technical as to lose most readers.'
Will Friedwald, The New York Sun

'Perchard doesn’t focus on the sensational parts of Morgan’s life but skilfully dissects his music, and gives it a fitting social context.'
Fred Dellar, Mojo

'Perchard navigates between Morgan’s music, its political and social context, its implications for the development of jazz and the minutiae of its creation and points of reference with natural expertise … Dust off and play your copy of The Sidewinder, then enjoy this book.'
Roger Thomas, BBC Music Magazine

'… an extraordinary achievement … remarkable. Subtitled ‘His Life, Music and Culture’, it is exactly that, not just life and music as most biographies are, but a substantial jazz history too and as such can be highly recommended.'
Chris Yates, The Jazz Rag

'Perchard's writing is clear, and the book is well researched (the author interviewed more than three dozen people for the book) and well documented. As the first biography of this important hard-bop trumpet player, the book is a significant addition to the jazz literature.... Recommended. Lower-division undergraduates through faculty and professionals; general readers.'
CHOICE, October 2007