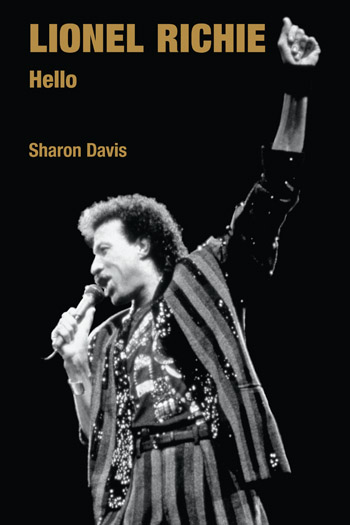 For over thirty years Lionel Richie has never looked back as a performer. From fronting his group the Commodores – the premier R&B pop unit of the seventies – he became the most popular singer/songwriter in the world by the eighties. A decade later he was the ultimate star entertainer with a ‘nice guy’ image. The Lionel Richie story is about a five-time Grammy winner who has sold more than 100 million albums worldwide. For nine consecutive years he had no 1 singles in America, a feat matched only by Irving Berlin. It is also the story of two broken marriages, personal insecurities, near-death experiences and an insight into the man behind a success story that broke the rules.

Lionel Richie is the first book written about Lionel Richie and the Commodores and draws on Sharon Davis’ unique access to the Motown archive, her numerous in depth interviews with Richie as well as her time as the Commodores’ publicist.

‘The book proceeds chronologically, record-by-record, tour-by-tour… and there’s a lot of information about Motown, too. It also touches personal matters and such sore points as Lionel’s burn-out in the late 80s/early 90s and his two divorces. Hello is a well-balanced and well-written book.’
Heikki Suosalo, Soul Express Online

'Davis does a decent job in rendering a thorough account of Lionel Richie's career to date -- from his formative years in the Commodores to his most successful years as a solo artist -- making for an informative read for popular music buffs.'
Donald Gibson, Blogcritics Magazine, July 2009