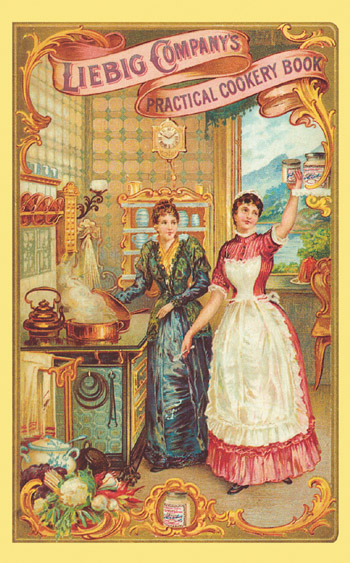 Baron Justus von Liebig was one of the greatest organic chemists of the nineteenth century. When his book The Chemistry of Food was translated into English in 1847, Eliza Acton altered the second (1855) edition of her bestselling Modern Cookery for Private Families to include his ideas for the cooking of meat, so that they came into the English cooking repertoire.

Liebig's discovery of the nutritional properties of beef extract had already been in use for invalids when he and four others decided to go into production in Uruguay, using the flesh of cattle that had been killed for their hides alone. He founded his factory at Villa Independencia, later to be called Fray Bentos, and his purpose was very largely philanthropic -- to provide in predigested form a cheap and nutritious food which could enhance the lives of the growing population of the world's poor. His beef extract later became Oxo.

Hannah Young was a well-known food writer of the era. The company's cookery book came out in a number of languages, with recipes tailored to the country in question and each compiled by a different food writer. Hannah's English version was compiled in 1894.