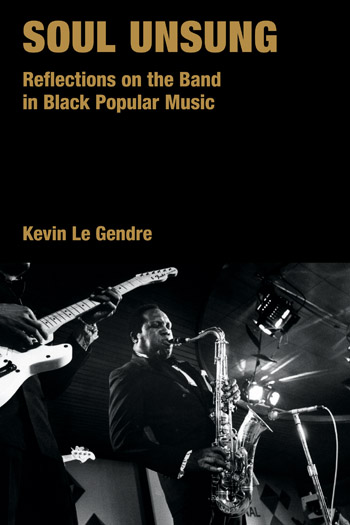 The history of soul music has been defined, first and foremost, by a succession of exceptional vocalists. It is impossible to conceive of the genre without them. This does not mean, however, that those who back singers, those who play instruments—bassists, drummers, guitarists, keyboardists and saxophonists—were reduced to nothing other than walk on parts. If Aretha Franklin and Otis Redding were able to move audiences, then their band members and arrangers, the likes of King Curtis and Booker T. Jones, played a key role in creating tracks that had commensurate emotional depth and technical ingenuity. These lesser known figures have heightened our listening pleasure.

In Soul Unsung, Kevin Le Gendre celebrates the contribution made by instrumentalists to soul. He analyses, in forensic detail, the inspiring creativity and imagination that several generations of musicians have brought to black pop, and highlights how they have broadened its sound canvas by adopting unusual stylistic approaches and embracing the latest available technology. This book offers insights into the state of contemporary soul and its relationship with jazz, rock and hip-hop. It is precisely because soul has not evolved in a vacuum that it has a canon that is enviably rich in variety.

Soul Unsung shines a light on the plethora of mesmerising sounds that constitute this heritage and explains why they affect the listener as much as a great singer. Placing the focus squarely on the band, Le Gendre sets out to change perceptions of one of the great forms of expression to have marked popular culture in the twentieth century, so that those who play are given, alongside those who sing, their rightful place in the pantheon of contemporary music.

'Bringing us up to date with neo-soul, broken beat and technological innovation, Soul Unsung is a refreshing example of a writer sharing, rather than merely airing, his knowledge.'
TLS, June 2013

'Kevin Le Gendre explores the role of instrumentation in black music in this enlightening and expertly arranged study. The book covers all eras of black music, from Cannonball Adderley to the Young Disciples, and is written with great eloquence and expertise.
ClassicRockMagazine.com

‘LeGendre does a yeoman’s job—with the creative approach of a songwriter and the uplifting spirit of a Sunday preacher—at unveiling the long-hidden history of the legendary instrumentalists of the Golden Era of Soul. With a comfortable handle on all the important names, dates and recordings, he weaves together stories that give credit to the unnamed instrumentalists who contributed to a musical revolution that is still shaping popular music today. A must-read for any student of culture.’
Ashley Kahn is a music journalist, concert producer, and professor of music history and criticism at New York University; his books include A Love Supreme: The Story of John Coltrane’s Signature Album

'A thought-provoking and endlessly informative book by a writer who knows his subject inside-out and, just as importantly, clearly adores it.'
Record Collector

'So many volumes have been written on soul singers that it's incredible that rarely has anyone seriously addressed the musicians that back them up. Kevin Le Gendre has put a unique spin on that topic with his new book Soul Unsung. Explore and enjoy.'
Pat Thomas, author of Listen Whitey
(for the full review click here)

'The author devotes ample discussion to legendary saxophonist King Curtis. While he did incredible work with such singers as Cooke and Franklin, Le Gendre analyzes what made the saxophonist’s “Memphis Soul Stew” so influential. He also provides solid, straightforward discussions of what made musicians like drummer Idris Muhammad work so well with bassists. The author describes the way Muhammad “could lead with the bass drum, often creating faintly melodic lines that bounced along with the same energetic fluency as the other musicians in the rhythm section.'
Downbeat, 2013