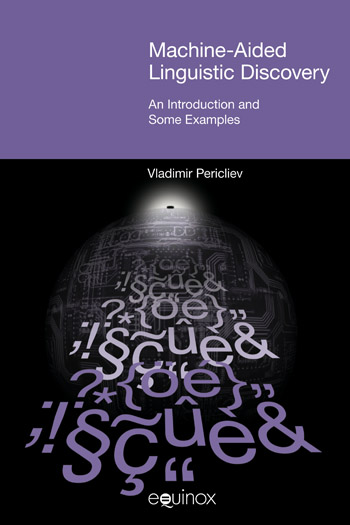 Solving linguistic problems frequently reduces to carrying out tasks that are computationally complex and therefore requires automation. This book is an introduction to machine-aided linguistic discovery, a novel research area, and argues for the fruitfulness of the computational approach by presenting a basic conceptual apparatus and several intelligent discovery programs.

One of the programs models the fundamental Saussurian notion of “system” and thus, almost a century after the introduction of this concept and structuralism in general, linguists are for the first time capable of handling adequately this recurring computationally complex task. Another program models the problem of searching for Greenbergian language universals and is capable of stating its discoveries in an intelligible form, a comprehensive English language text. It is the first computer program to generate a whole scientific article. A third program detects potential inconsistencies in genetic language classifications. These, and the other programs described in this book, are applied with noteworthy results to substantial problems from diverse linguistic disciplines such as structural semantics, phonology, typology and historical linguistics.

Machine-Aided Linguistic Discovery will be of interest to linguists and to scholars working in the areas of computational linguistics, Artificial Intelligence and the philosophy of science.

'The subtitle of Vladimir Pericliev’s book, An Introduction and Some Examples, is a succinct and accurate description of its contents. Pericliev argues briefly for the usefulness of computer-aided techniques in linguistic discovery, contrasting it with the intuitionist approach which has characterized linguistic discovery throughout much of its history. The bulk of the book is devoted to examples of software-aided linguistic discovery drawn from his own work. Pericliev’s essential point is a valid one: Machine-aided discovery has a tremendous untapped potential for analyzing data sets which are too large to be amenable to human inspection. The success of this approach is best exemplified by his machine-aided discovery of a possible genetic relationship which would otherwise have eluded human discovery.'
Eric J. M.Smith, University of Toronto, Computational Linguistics, 2010