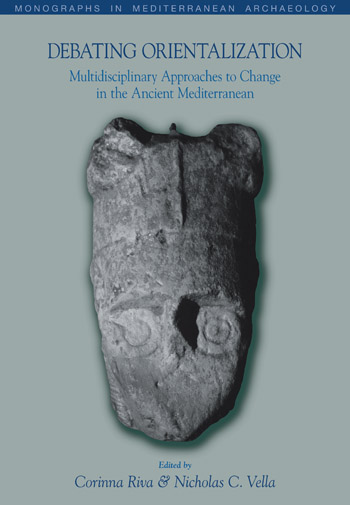 Initially coined by art historians in the second half of the nineteenth century to denote an ambivalent artistic style and period, 'Orientalizing' has been invariably used to describe a phenomenon, a revolution, or a movement. Regional developments and innovations in the ancient Mediterranean have been explained by reference to an Orient, the metaphorical bazaar containing the artistic opulence and social sophistication that spread to the West and changed it. Debating Orientalization brings together papers presented at a symposium held in Oxford in 2002 to debate the theme of ancient Orientalization. The volume reassesses the concept of Orientalizing, questioning whether it is valid to interpret Mediterranean-wide processes of change in the Late Bronze and Early Iron Ages by the term Orientalization. Like the ancient Mediterranean itself, the list of contributors is multicultural, and their contributions multidisciplinary, combining various strands of archaeological and textual evidence with different methodological and theoretical approaches.

In all aspects, this is a very important book; for Classicaland Mediterranean Archaeology in particular it is, in fact, long overdue.
BIBLIOTHECA ORIENTALIS LXVII N° 5-6, september-december 2010


'I highly recommend essays by Purcell, Wengrow, and Osborne, especially for those concerned with issues of cultural transformation and exchange. I also enjoyed the essays of Morris and van Dommelen. Gubel's essay caused me to reflect on how the cultures of Canaan/Israel might have contributed to and been shaped by these processes of Mediterranean interconnectivity and what impact that might have had on the religious world/s that subsequently produced the biblical and para-biblical texts.'
Michael Carden, University of Queensland, The Bible and Critical Theory, Volume 4, Number 2, 2008