The Power of Technology in the Bronze Age Eastern Mediterranean 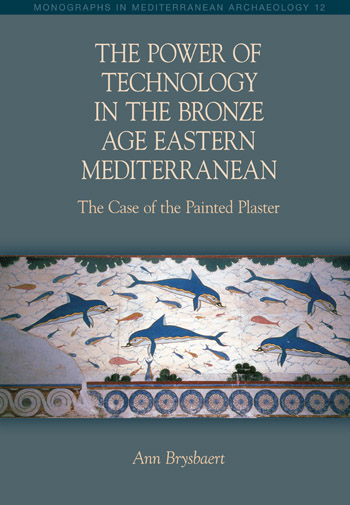 In the past, Bronze Age painted plaster in the Aegean and the Eastern Mediterranean has been studied from a range of different but isolated viewpoints. One of the current questions about this material is its direction of transfer. This volume brings both technological and iconographic (and other) approaches closer together: 1) by completing certain gaps in the literature on technology and 2) by investigating how and why technological transfer has developed and what broader impact this had on the wider social dynamics of the late Middle and Late Bronze Age in the eastern Mediterranean.

This study approaches the topic of painted plaster by a multidisciplinary methodology. Moreover, when human actors and their interactions are placed in the centre of the scene, it demonstrates the human forces through which transfer was enabled and how multiple social identities and the inter-relationships of these actors with each other and their material world were expressed through their craft production and organization.

The investigated data from sixteen sites has been contextualized within a wider framework of Bronze Age interconnections both in time and space because studying painted plaster in the Aegean cannot be considered separate from similar traditions both in Egypt and in the Near East.

This study makes clear that it is not possible to deduce a one-way directional transfer of this painting tradition. Furthermore, by integrating both technology and iconography with its hybrid character, a clear ‘technological style’ was defined in the predominant al fresco work found on these specific sites. The author suggests that the technological transfer most likely moved from west to east. This has important implications in the broader politico-economic and social dynamics of the eastern Mediterranean during the LBA. Since this art/craft was very much elite-owned, it shows how the smaller states in the LBA, such as the regions of the Aegean, were capable of staying within the large trade and exchange network that comprised the large powers of the East and Egypt. The painted plaster reflects a very visible presence in the archaeological record and, because it cannot be transported without its artisans, it suggests specific interactions of royal courts in the East with the Aegean peoples. The painted plaster as an immovable feature required at least temporary presence of a small team of painters and plasterers. Exactly this factor forms an argument in support of travelling artisans, who, in turn, shed light onto broader aspects of contact, trade and exchange mechanisms during the late MBA and LBA.

'This book is an extremely important piece of research that opens up new vistas in the study of painted plaster in the ancient Aegean and its influence and appearance throughout the eastern Mediterranean Bronze Age. The author has clearly opened the door for a relatively new and refreshing course of research.'
Aren M. Maeir, Bar-Ilan University, American Journal of Archaeology, 114.3, July 2010

'While the title emphasizes the 'power of technology in the Bronze Age eastern Mediterranean', the originality of the book relies on its subtitle, the 'painted plaster', where the author has to offer first-hand observations. As claimed in the introduction, Brysbaerst's prime interest is to provide new insights into the whole tissue of interaction between human and social agency, technological production, and the transfer of knowledge within the eastern Mediterranean, through a multidisciplinary approach. Furthermore, the author argues that her present work combines issues of iconography, technology and style, moving a step forward from the traditional stylistic and iconographic studies.'
Hariclia Brecoulaki, Centre for Greek and Roman Antiquity (KERA), The National Research Foundation, Athens, Bryn Mawr Classical Review 2010.12.27