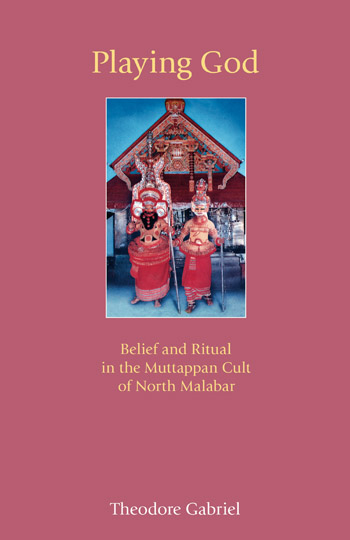 Playing God discusses the genre of rituals known as the ‘Teyyam’, extant in the North Malabar region of Kerala State, India. In this elaborately costumed ritual practitioners invoke the spirit of a deity into themselves enabling them to talk to the ‘god’ and invoke his/her blessings and predictions of their future. This book concentrates on the cult of the Muttappan duo of gods, the most popular among the Teyyams of North Malabar. The Muttappan cult, though originating from worship of a forest god by tribal groups and untouchables of the hill districts of North Malabar, is not only popular in Kerala, but also attracts worshippers from all the castes and regions of South India.

Playing God analyses the mythology and ritual praxis of the Muttappan cult and examines attempts to integrate the cult into a wider Hinduism by enunciating a new hermeneutic of the legend and rituals based on the Hindu Advaitic tradition. The book also discusses how the Teyyam ritual contrasts significantly with rituals and worship in Brahminical Hinduism. The popularity of the cult is a reflection of the changing relationships between castes in Kerala, involving a closer symbiosis and reflecting the urge by the untouchable groups of Kerala to gain a higher standing and acceptance in Keralan Hindu society. The rituals are rich in theological significance and symbolism, and have links to the performing arts of Kerala such as Kathakali and Ottam Tullal.

“This fascinating little book deals in detail with what at first might seem a small cult, colourful and dynamic certainly, but of significance merely local to its place of origin in the Indian state of Kerala. As the story unfolds, however, it becomes clear that this is far from the case, and that the phenomenon is full of interest for students of the history of religions. From Dr Gabriel’s many other writings we have learned to expect patient investigation and humane and sympathetic interpretation. In this book we find those qualities once more abundantly on display.”
From the Foreword by Professor Andrew Walls, Liverpool Hope University