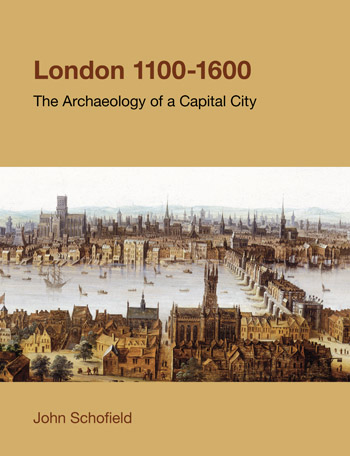 Shortlisted for Current Archaeology Awards 2013 Book of the Year

Since the early 1970s the increasingly effective conduct of archaeological work in the City of London and surrounding parts of the conurbation have revolutionised our view of the development and European importance of London between 1100 and 1600. There have been hundreds of archaeological excavations of every type of site, from the cathedral to chapels, palaces to outhouses, bridges, wharves, streams, fields, kilns, roads and lanes. The study of the material culture of Londoners over these five centuries has begun in earnest, based on thousands of accurately dated artefacts, especially found along the waterfront. Work by documentary historians has complemented and filled out the new picture.

This book, written by an archaeologist who has been at the centre of this study since 1974, summarises the main findings and new suggestions about the development of the City, its ups and downs through the Black Death and the Dissolution of the Monasteries; its place in Europe as a capital city with great architecture and relations with many other parts of Europe, from the Baltic to the Mediterranean.

London has been the most intensively studied medieval city in Europe by archaeologists, due to the pace of development especially since the 1970s. Thus although it is be a study of a single medieval city, it is also a major contribution to the Archaeology of Europe, 1100-1600.

The book is valuable not only for bringing the reader up to date with archaeological discoveries, but it also sets out an agenda for future work.
Antiquaries Journal
93, 2013

The reader can have no better guide to the archaeology of medieval London than John Schofield who has studied the subject for many years and illuminated it with numerous publications of which this is just the latest. We are seeing here the fruits of a career extremely well spent.
Archaeological Journal, 2012

John Schofield's survey of the archaeology of medieval London summarizes many individual digs [and] situates them within the broader historical understanding of medieval London.. [he] sets a broad agenda for future research that will appeal to many historians.. Archaeology has the ability to offer historians new ways of understanding profound changes that are not readily apparent in the written record.
Katherine L French, University of Michigan, Sixteenth Century Journal 43 (2012)

This book will prove to be extremely useful to those studying the medieval period in the UK, those studying the archaeology and development of London in other periods, and those examining the medieval period in more general terms, including across Europe. [It] represents an excellent example of what can be achieved by using the wealth of information that exists in some shape or form as a result of archaeological fieldwork via the planning process.
The London Journal, Vol 38, No. 1, March 2013

..an expert account.. the book is well designed, expertly illustrated and manages to bridge the gap between an accessible and popular account, with a scholarly framework with full references and an extensive bibliography. This is a book that readers can turn to again and again in order to refresh their knowledge of the archaeology of this medieval metropolis
Terry Barry, Medieval Archaeology 56, 2012

This is an important and useful book. And, crucially it's a good read.
British Archaeology, May-June 2012

John Schofield synthesises a huge volume of archaeology to produce this coherent account packed with detail and fascinating visual evidence, and much enlivened by the author's own observations -- for example, on exotic imported food and whether Londoners had different diets from other parts of England, or on the impact of communities of 'aliens' on the city, including Jewish financiers, and Italian, French and Spanish merchants, or on the effect of London on its hinterland.
SALON number 267, December 2011

His detailed knowledge of projects both famous and unsung paints a potent picture of London between 1100 and 1600.
Current Archaeology, June 2012

This is a stimulating book, opening one's eyes to many facets of the past. It can be highly recommended to anyone who wants to find out what archaeology has to offer about London's history, and where future research might lead
Bridget Cherry, London Topographical Society Newsletter, May 2012

Schofield draws useful parallels between London and other comparable cities in Europe.. there are some wonderful kernels of information that connect the buildings of London to others throughout the country. This volume is likely to appeal both to those with a general interest as well as to those with more defined archaeological leanings...Schofield's lucid writing style is concise, informative and engaging.
Sara Crofts, SPAB, Cornerstone, Autumn 2012